The region of Mani és consisted by different and particular characteristics. It is a place that combines the wild beauty of natural landscape with the simplicity and also the residents’ warmth. Despite the dominance of the stone, it is a place that charms everyone. It is a rough place not easily accessible, functioned in turmoil historical periods as shelter for the inhabitants, who constructed those buildings,mainly to be protected from their enemies.

Therefore, the main characteristic of this area is the minimal and strict architectural in the buildings that, as it is in nature, they have as main material the stone. Imposing and magnificent towers, fortified mansions and magnificent paths constitute today Mani as an “open museum”. Messinian Mani is one from the most beautiful places in Greece.

Until today the nature and the inhabitants keep proudly their hospitality, and all they want is to reveal generously their beauties to the travellers.

Beginning from Exochori is the most authentic mani’s way to explore the nearby villages of Taygetos, Tseria, Saidona, Kastania, Milia. These villages are very beautiful consisted by traditional houses, and solitary towers. Hiking under the shadow of the trees, mostly olives and cypress, crossing small traditional cafes where the villagers are treating chewing gums, omelettes with local goods as the famous lalagkia. In Kastania many of the houses still preserve plates on the roofs.

We recommend to visit the Byzantine church of Trikampanou (in the edge of the village, where you will have a splendid view – in order to go you will need to pass through the courtyard and the fold of a house!) and also Saint Petros with the towering belfry. In Tseria the beautiful traditional houses mesmerize the visitors and the view in the gorge of Rintomou is splendid.

In February and in March, the landscape is filled with orchids, and the gorge attracts many nature lovers. Milia is one the of most isolated villages, a place which can caprtivate you by its wild beauty. Going down the slope you will meet a incomparable in beauty village, Kardamyli, consisted by traditional houses with tiled roofs, in a small bay in the foothill of Taygetos, opposite from the green islet Meropi or Amygdalonisos.

The most certain thing is that you will be charmed, in any season of time you will decide to visit Mani. 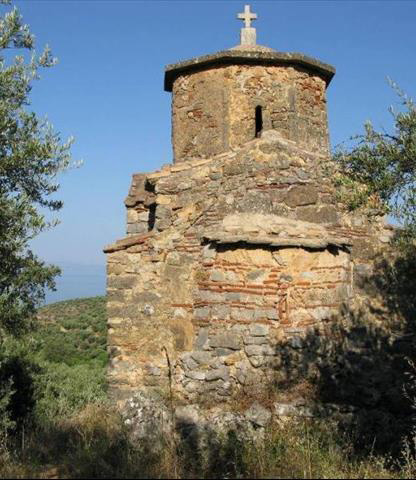 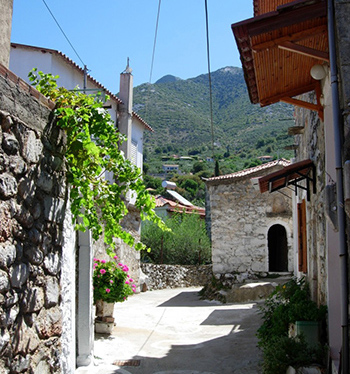 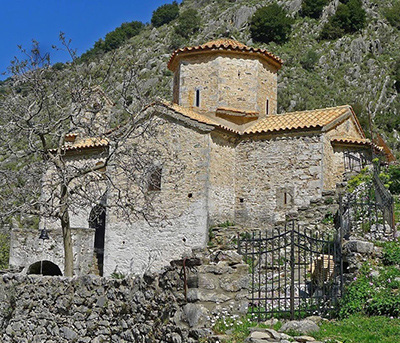 Exochori, is settled on the sidehill of Taygetos at an altitude of 500m., abstains 8 kms from Kardamyli and 43 kms from Kalamata. Until 1932 it was named as "Androubista".

The first indication of its existence is on the 13th century. Androubista was found in the "Royal street" that connected Kardamyli with Sparta and Mystras.

From the same road passed and settled, on the 1st century B.C. in the mountains of Taygetos the "Eleytherolakones", whose presence is testified by a sign made of marble plate – The Altar in the Temple of St. Nikolaos Anastasaion in the Exochorio. Also, Palaiologoi passed from the same street, They were the last Byzantine emperors, and they had their vacations in the Mansion (Paliochora) in Abia.

There are five settlements in Exochorio: Nikovo, Exochori, Chora, Kolympetseika and Pripitsa, These settlements, were developed progressively afterwards the destruction of the old Androubista on the 17th century, which was settled in the region, where local people named it as “Chalasmata". They flourished especially on the 18th and 19th century .

Also the crowd – approximately 100 – familial little churches, that are saved, and are designed with hagiographies from local icon hagiographers, as: the undertaking in Kolympetseika, the St. Nikolaos Anastasaion in the Chora, the St. Dimitrios, Virgin Mary Ntogaion, the St. Trinity Kitriniaraion, the St. Ioannis Mounouchaio in Exochori, Theofaneia, the St. Marina, the St. Stasia in Nikovo etc. It is a village which it is offered for mountainous tourism.

There are above seven hundred species of plants, which compose the abundant vegetation of this region. The fauna is rare, and it is considered to be as one of the most beautiful ecosystems and a shelter for wild animals and birds.

Taygetos that in his paths hides a lot of mysteries and histories, took his name, from Atlanta’s daughter, the nymph Taygeti. Taygeti had a son with Jupiter whose name was Lakedaimonas, and was one local hero. Lakedaimonas named the mountain with his mother’s name. Isychios Alexandreas reports that the name of mountain comes from “Tays”, which means “Great” or “Much”.

Taygetos separated the two cities, in Eastern Sparta and in western Fares, which nowadays is named Kalamata. It is the tallest mountain in Peloponnese, reaching 2,407 m (7,896 feet) at the Profitis Elias mountain peak.